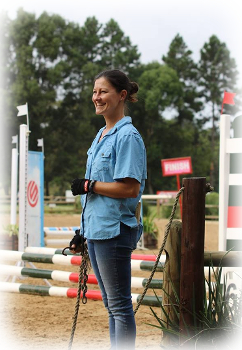 Equine Services SA was launched in April 2010 – a culmination of a lifetime devoted and dedicated to horses! Holly has responsibly re-homed over 200 Thoroughbreds off the track since 2012. Qualifying as a Provincial Level 2 Show-jumping Course Designer in 2017, Holly continues to host regular successful and well-supported show-jumping training shows at Summerveld Lodge

Holly has been involved in the horse world throughout her life, starting at an early age with that defining moment of childhood adoration for all things horsey. In order to pursue her passion and gain a solid theoretical and practical  she studied Animal Science at UKZN graduating with a BSc. Agric. Hons. Following on from her degree, Holly took up the position of Foal Manager at Summerhill Stud, from here her interest to see how equine matters are done in other parts of the world took her to the UK and Australia which included stud and nursing work, assisting vets taking X-rays and prepping yearlings for sales. While in the UK Holly gained experience in the medical profession, working as a medical representative. On returning to SA Holly continued to work as a medical rep, and was then appointed as manager of Summerveld Equine Hospital. Holly has continued to remain involved in horse welfare, working as a volunteer at the Kloof Horse Care Unit, and a founding member and ex-Director of the Coastal Horse Care Unit.